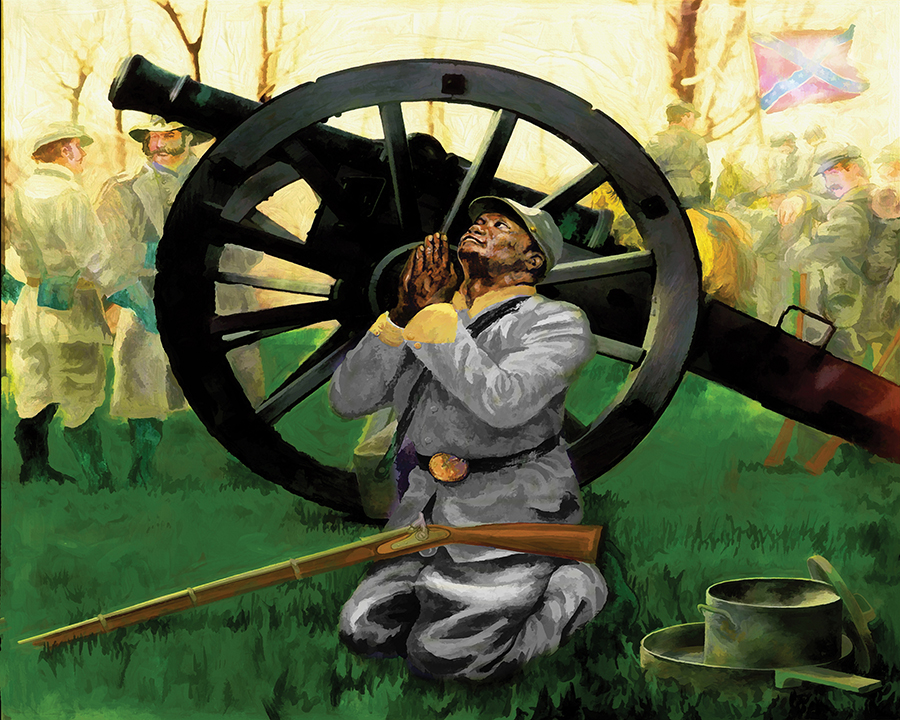 Some black men volunteered to fight for the Confederacy out of loyalty to their homeland. For example, a militia of 440 free black men formed up in Louisiana and vowed to put their lives on the line to save the Confederacy from the Union power.

At the same time, slaves had been fleeing behind Union lines since early in the war. Some stayed with the army and helped out. Then black soldiers were mustered for the Union army as part of the Emancipation Proclamation in 1863. In 1864, close to the end of the war, such luminaries of the Confederacy as Major-General Patrick Cleburne (the "Stonewall of the West," Jefferson Davis (the president of the Confederacy) and Robert E. Lee (the commander of the CSA's armed forces) agreed that slaves should be both armed and freed if they fought on the Southern side.

Serving with the Confederate State’s Army, Jim had his own personal ways of understanding when the general was about to do battle. When he would see the general praying two or three times in a night, and it was then that Jim would know, with nary a word said by Jackson, that battle was near. With this personal insight, Jim would know to have Jackson’s haversack and his meals packed for the next morning, along with a saddled and ready Little Sorrel, so as to facilitate the general’s giving the Yankees purest hell.

Jim would brook no disrespect when the general was praying either, for he knew the master general meant business when talking to God. Jim demanded that everyone in proximity of Jackson understand and appreciate the deadly seriousness of his master’s petitions to his God. As a deeply religious man himself, Jim spent his share of time on his knees as well.  Please CLICK HERE to purchase a sign by artist Giclee 16" x 20" wall art print, Here is text from the book Unlce T and the Uppity Spy that inspired this painting: