A Stands for Adam 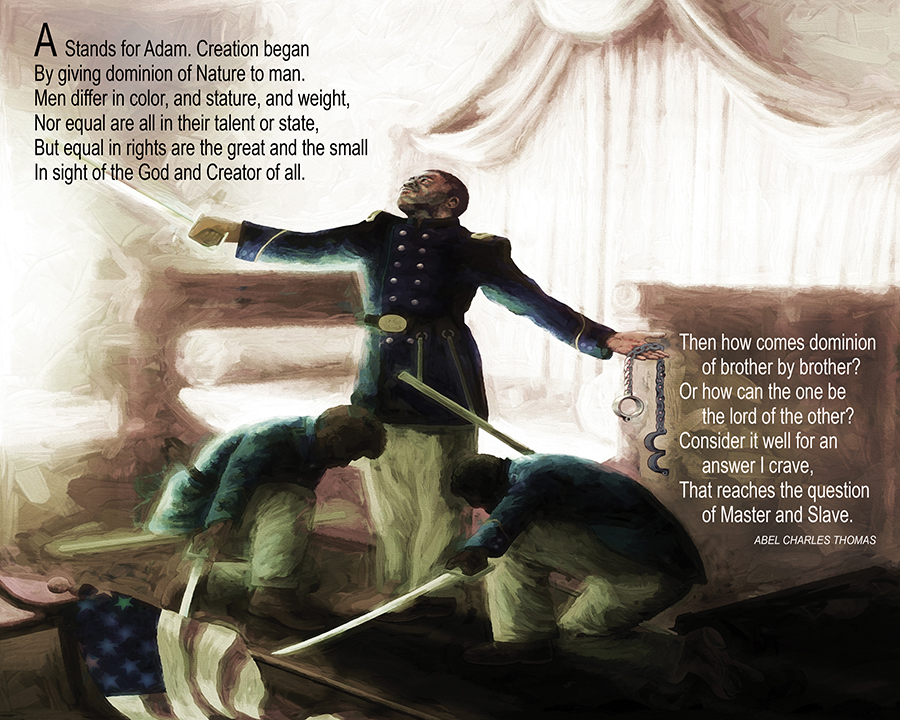 The picture above depicts Tyler Lewis, fictional brother of Jim Lewis, who became a Union spy. Unlike Jim, Tyler let his hatred of the lash of slavery dominate his life and thoughts.

Frederick Douglass shed light on the work of the American black spy and spoke of the daring and bravery of black espionage agents. Some of these agents repeatedly crossed enemy lines, risking capture and being shot. Others stayed in place for the long term, hiding their sympathies behind a mask of subservience and taking the risks involved in transmitting information from the South to the North. The CIA reports that the president of the Confederacy, Jefferson Davis, unknowingly harbored two black Union spies in his home in Richmond, Virginia, the capital of the Confederacy. These two Union spies had their fingers on the very pulse of the Confederacy.

Many spies preferred to remain anonymous for reasons of personal safety, even once the hostilities had ended, or at least once the shooting war had stopped. This was true of some black espionage agents who still had to make their way in a prejudiced society that, unjustly, sometimes looked at them as the “cause” of the national upheaval. A tendency to under-value the contributions of blacks in America also factored into what little we know about America’s black espionage agents. What was more, the secrecy necessary for espionage meant that not much documentation was kept about any spy activities. Piecing things together, however, we know that the activities of black espionage agents made substantial contributions to the Union’s victory.

Allan Pinkerton was well-versed in the usefulness of black spies. Any slaves liberated by the Northern army or who had run away were interviewed by him or by members of his intelligence network to discover what they knew and what they were willing and able to do to gain militarily significant information. Blacks’ lowly place in society at that time aided them in their spy activities, as talkative Southern whites sometimes saw them as humble, uneducated servants unable to comprehend or to use information they might have gathered about Southern military activities. Little did they know that the eyes and ears of humble, unassuming servants were to become, in a significant number of cases, the eyes and ears of the Union.   CLICK HERE to purchase a sign by artist Giclee 16" x 20" wall art print, The above text from the book Unlce T and the Uppity Spy is what inspired this painting: