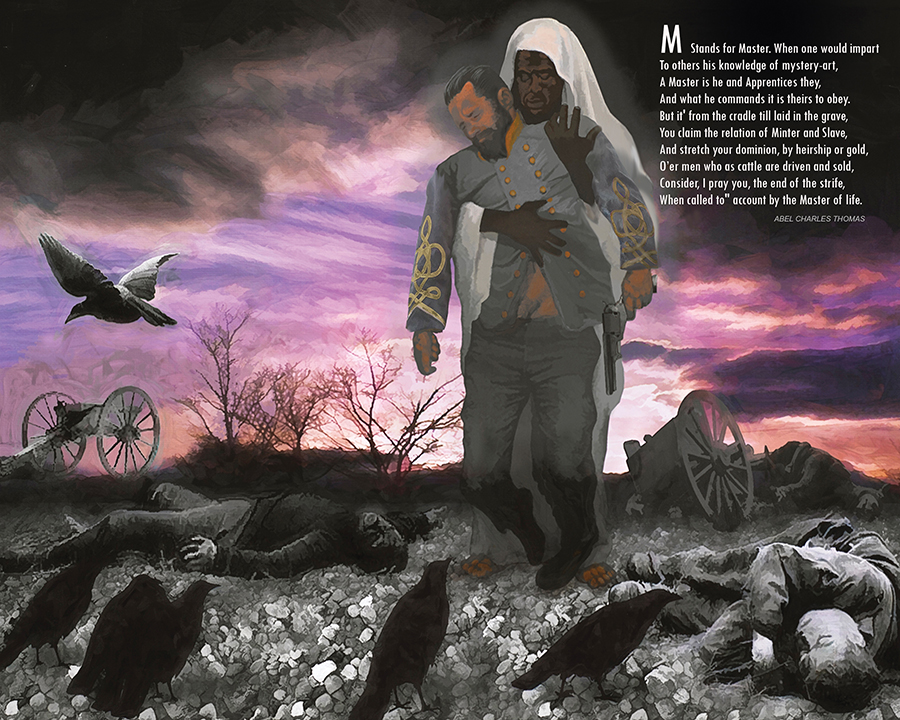 Artwork from the book Uncle T and the Uppity Spy emphasizes that Thomas Stonewall Jackson was more than a courageous and skillful Confederate general; his service to the black community in his hometown in Virginia made him the apprentice of God, and he obeyed his internal moral calling to the end.

Dr. Martin Luther King stated that “a persistent civil war rages within all of our lives” between the good side of our personalities and the bad. Winning the great civil war that each of us fights within requires more heroism than swordsmanship, proficiency with a rifle, or strategic battlefield planning. Jim Lewis won that civil war. He was a good man. He was a good man in spite of negative circumstances. He won the inner battle between love and hatred toward others, and he chose love. He heroically fought the good fight that brings us all a little more light in the darkness. Raised in a system that hated and oppressed his kind, Jim obeyed the injunction that Dr. Martin Luther King expressed a hundred years later: “Returning hate for hate multiplies hate, adding deeper darkness to a night already devoid of stars. Darkness cannot drive out darkness; only light can do that. Hate cannot drive out hate; only love can do that.”

A Native American elder once described his own inner struggles between love and hatred in this manner: ”Inside of me there are two dogs. One of the dogs is mean and evil and fights others all the time. The second dog is good and is respectful and even kind to others. The mean dog fights the good dog all the time.”

When asked which dog wins, the elder reflected for a moment and replied, “The one I feed.”

Jim Lewis “fed” his better nature. He embodied the humble and noble spirit that dwells in the African American and is so rarely depicted in the news media or in entertainment, which seem to glorify people who represent the very opposite. Many times the power of religion, specifically Christianity, is ignored when describing the motives of people in history. While some might think Jim Lewis’s love for General Jackson indicated that Jim was a mindless “Uncle Tom,” in fact Jim Lewis acted out of agape love. Agape love is Christian love for all of one’s fellow human beings. Jim was an exemplary servant to his master, but he was a servant to all, sacrificing himself for the sake of others.

He and Stonewall Jackson were well-matched, as Stonewall Jackson believed so deeply in the godly nature of African Americans that he defied Virginia law to educate them in the Bible. Jackson, too, tried to extend agape love to his fellow man, even if that man was a slave.

Jim’s motto might have been John 15:13: “Greater love has no one than this, that he lay down his life for his friends.” He risked his life being in the Confederate army with General Jackson.

I hope my community conceives of a desire to find Jim Lewis’s burial site and place there a grave site headstone to honor a man of virtue, valor, and victory. CLICK HERE to purchase a sign by artist Giclee 16″ x 20″ wall art print, The above text from the book Unlce T and the Uppity Spy is what inspired this painting: