Artist/writer Gregory Newson personal goal has been to highlight the middle polarity of the American Civil War which rarely gets any acknowledgment and understanding of the conflict, and how it affects us today. Furthermore, to show there was no true difference between the North and South, both needed a drug called; slavery, and ever since the end of the conflict our nation has been going through “Drug Withdrawal”.

Did African-American actually serve in active combat on behalf of the South? YES. 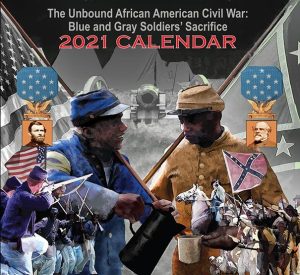 A newspaper correspondent from the New Orleans Daily Crescent reporting on one of the early battles of the war stated that a servant named Levin Graham refused to stay in camp during a fight, “but obtained a musket, fought manfully, and killed four of the Yankees himself.” The first Union Officer to be killed in battle was an abolitionist named Theodore Winthrop. Winthrop, a union major on General B. F. Butler’s staff, was killed at Big Bethel on June 1861. What makes this death even more significant is the fact that he was killed by Sam Ashe, a black body servant to a Confederate soldier in a Company of the 3rd Virginia Infantry called the Wythe Rifles.

Records show that New York officers on patrol reported being attacked near New Market Bridge close to Big Bethel by Confederate cavalry and a group of 700-armed blacks on December 22, 1861. The Northerners killed six of the blacks before retreating; officers later swore affidavits stating that they were attacked by blacks, and later complained: “If they fight with Negroes, why should we not fight with them too?”

Who is defined as a soldier, a clarification of terms is helpful. Gen. August Kautz, in his 1864 Customs of Service for Officers of the Army: As Derived from Law and Regulations and Practiced in the United States Army, offers a very broad definition. In the fullest sense, any man in the military service who receives pay, whether sworn in or not, is a soldier, because he is subject to military law. Under this general head, laborers, teamsters, sutlers, chaplains are soldiers. At the end of the war, the Confederate African-Americans soldier received a pension for their participation as soldiers.